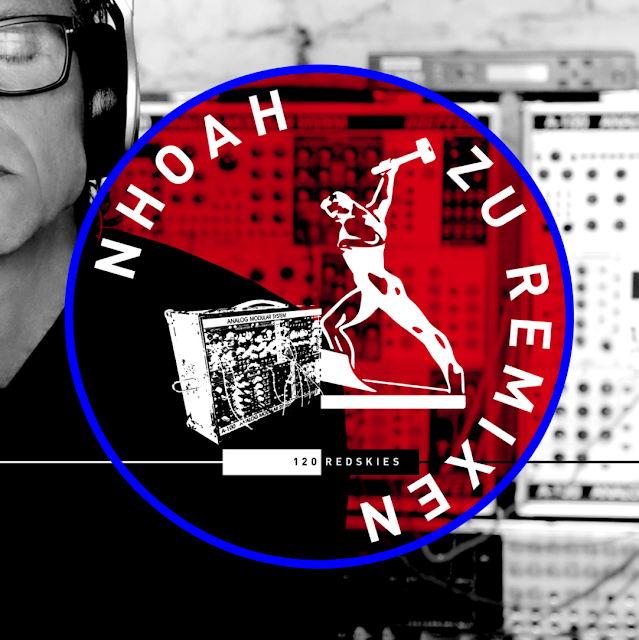 After the success of his previous single ‘Abstellgleis,’ followed by Abstellgleis zu Remixen  Berlin-based electronic maestro NHOAH has unleashed another sterling offering, 120 Red Skies zu Remixen. The EP features remixes by Pixelord, Mieko Suzuki and Peter Zirbs, as well another version of the original recorded in French.

The skilled producer, engineer and drummer has worked alongside the producers of The Eurythmics, Depeche Mode, and Bronski Beat’s Larry Steinbachek. His previous album Tangowerk was nominated for the German Record Critics’ Award Preis der deutschen Schallplattenkritik. His extensive list of achievements includes work with Jayne County and Romy Haag, arranging and composing for David Hasselhoff, as well as contributing to material by contemporary French rock-star M. He has earned several Gold Awards writing and producing for German pop-rock band MIA, and his own band Peacock Palace sold more than 2 million copies of their song, ‘Like A Snake’, branding them the first German band to have their video on heavy rotation on MTV London.
Pixelord is a Russian cyber-futurism experimental electronic artist, who integrates an interesting an array of different genres and emotions into his music such as future bass, grime, footwork and garage. His remix of ‘120 Red Skies’ is an atmospheric escape from bustling cityscapes and winter’s numbing clasp; complete with concrete percussion, a brilliant aura of kaleidoscopic synthesizer bliss, and distanced, yet lingering vocal samples producing a hypnotic, undulating effect.
The experimental take on 120 Red Skies by Mieko Suzuki is a pulsating, lucid dream; swelling synths and pounding bass drums sit atop blistering ambience and thrilling soundscapes. The Berlin-based  Japanese DJ, producer and sound artist weaves together elements of deep-house or tech-house, atmospheric textures and compressed beats to encapsulate her heavily-processed, effect-drenched material in real time. Utilizing feedback loops, field recordings, and many other sounds during live sets. Mieko has also received support from Vice’s music channel Noisey on her music and performance pieces.

Multi-instrumentalist and electronic producer Peter Zirbs has been an important part of the Viennese rave and techno scene since the ‘90s; releasing music under various pseudonyms, composing scores to a range of experimental films, as well as producing and remixing for various artists, including his internationally-acclaimed experimental remix for the British avant-garde composer Christopher James Chaplin.  He takes this remix to another level – it’s backed with energetic beats and immersive drive.